Aluminum and aluminum alloys have been increasingly used in industrial fields and daily life, and their functional and decorative requirements are also increasing. Therefore, anodizing and coloring requirements are proposed in production. The anodized film of aluminum alloy has a unique honeycomb structure, and can utilize its strong adsorption capacity, and then obtains various vivid colors and improves the corrosion resistance and wear resistance of the film layer through certain coloring and sealing treatment.
The main methods for coloring aluminum and aluminum alloy anodized films are:
(1) Coloring by adsorption, that is, dyeing with organic or inorganic dyes.
(2) Electrolytic coloring, that is, electrolysis after anodizing and before sealing, to produce various colors in the film.
(3) Natural color development, the anodized film is formed at the same time as the film, and no dyeing is required.
Coloring should be carried out after anodizing and before sealing. The oxide film should be carefully cleaned with cold water before coloring. In industrial production, the anodized aluminum and its alloy products are sealed regardless of coloring to prevent contamination of the oxide film and improve the corrosion resistance and insulation properties of the oxide film.
In general, the most suitable oxide film for coloring is a sulfuric acid anodized film. After aluminum and aluminum alloys are anodized by sulfuric acid, the film formed on the surface is colorless and transparent, with many pores and strong adsorption capacity.

The inorganic dye-colored inorganic pigment is colored by using an inorganic salt. This method came out early, but it was mostly replaced by organic dyes. The mechanism is mainly physical adsorption, that is, inorganic pigment molecules are adsorbed on the surface of the micropores of the membrane layer for filling. Inorganic pigment coloring light resistance Table 2-12. 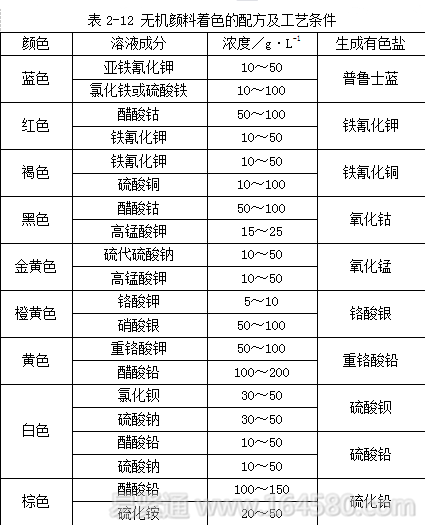 Organic dyes for coloring organic dyes generally use cotton, wool, silk dyes, commonly used direct dyes, acid dyes, salt dyes, reactive dyes and so on. Most of the organic dyes used for coloring are acidic direct dyes.
The mechanism of coloration of organic dyes is complicated, and it is generally considered that there are both physical adsorption and chemical reactions. Among the organic dyes, some enter the oxide film in the form of physical adsorption, and the fixing ability is poor. Other dyes have good fixing ability and can be considered to enter the oxide film in the form of chemical adsorption or combination with chemical reaction. result. The formula and process conditions for coloring organic pigments are shown in Table 2-13. 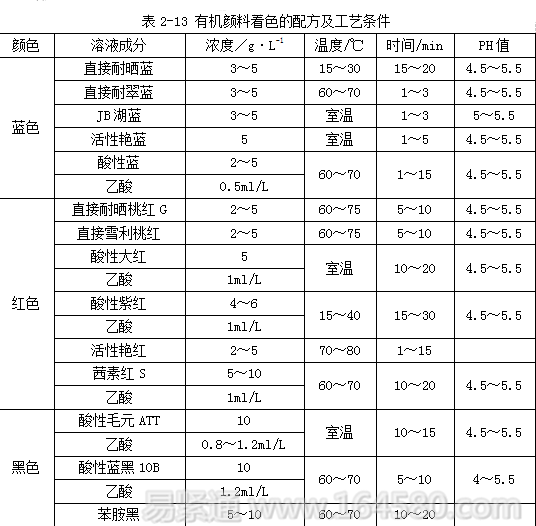 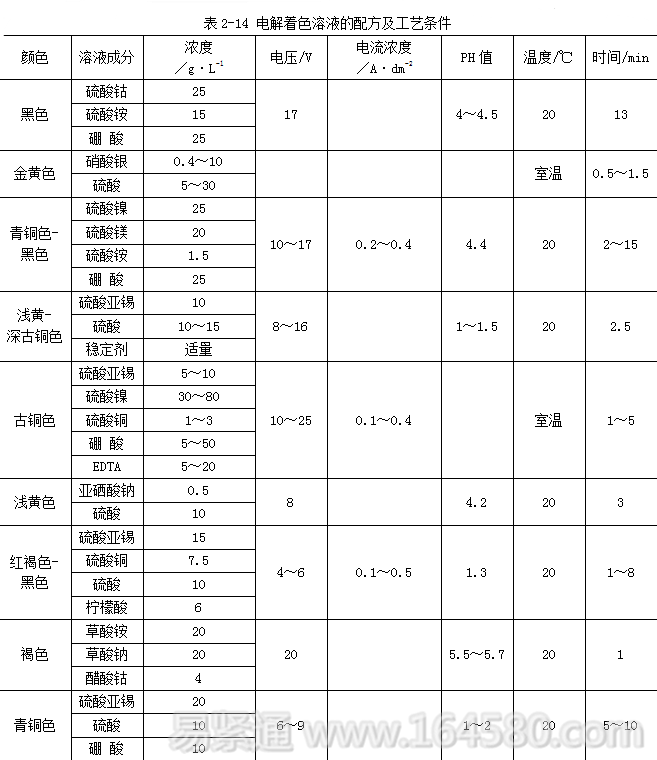 At the time, the volume increased by about 33%. If generated

At the time, the volume increases by almost 100%. Therefore, the pores of the oxide film are closed. The hydration can be carried out either on the pore surface of the pore film layer or on the surface of the dense film layer.
(2) Steam sealing method. The steam sealing method is identical to the hot water sealing method except that it is carried out in a pressure vessel. The temperature of the saturated steam is 100 to 120 Â° C, the pressure is 0.1 to 0.3 MPa, and the time is 20 to 30 minutes. The most effective method of sealing is to evacuate the container, place the workpiece in the container for 20 minutes, and then pass steam. This closed method is suitable for treating the inner surfaces of large parts such as tanks, boxes, towers and pipes.
(3) Inorganic salt blocking method. The operation method of the inorganic salt sealing method is similar to the hot water sealing method. In addition to the hydration, there is a double effect of the inorganic salt solution being hydrolyzed in the pores of the film layer to cause precipitation of the pores. The film layer sealed by inorganic salt has a slight change in gloss and color, and can be used for workpieces that are less demanding in color. Among the inorganic salts used are molybdate, silicate, phosphate, acetate and chromate, and dichromate is the most widely used. The oxide film treated by this method is yellow, and its corrosion resistance is high, but it is not suitable for decorative use.
The dichromate blocking method is to place the anodized aluminum and aluminum alloy parts into a strong oxidizing dichromate solution at a relatively high temperature to chemically react the oxide film with the dichromate. The basic aluminum chromate and aluminum dichromate are precipitated in the pores of the membrane, and at the same time, the hot solution causes hydration on the surface of the oxide film layer, thereby enhancing the sealing effect. Therefore, it can be considered as a double sealing effect of filling and hydration. The chemical reaction of dichromate occurs as follows:

Usually, the potassium dichromate blocking solution used has a concentration of 50 to 70 g/L, a temperature of 90 to 95 Â° C, and a treatment time of 15 to 25 minutes. In addition, it is important to note that the solution must not contain chloride or sulfate. Dichromate and chromate have corrosion inhibition effect on aluminum and aluminum alloy, so the oxide film sealed with chromate solution has good corrosion resistance and can be used for sealing of anodized film for protection purposes. The film after the dichromate is blocked will appear yellow, which is not suitable for the sealing of the colored oxide film, and the waste liquid treatment is complicated, which is not conducive to environmental protection, so it should be used as little as possible or not. Also sealed with molybdate, environmentally friendly treatment is relatively simple.
The hydrolysis blocking method is a process in which the anodized film is closed by using a nickel salt, a cobalt salt or an aqueous solution in which both are mixed as a hydrolyzate. The hydrolysis blocking process includes both hydration and a hydrolysis reaction in which a nickel salt or a cobalt salt forms a hydroxide precipitate in the pores of the membrane. After the extremely dilute solution of the nickel salt and the cobalt salt is adsorbed by the oxide film, the following hydrolysis reaction occurs:

The hydroxide of nickel and cobalt is almost colorless, and therefore, the hydrolysis of the salt does not affect the original color of the oxide film.
For oxide films colored by adsorption with organic dyes, hydroxide precipitation of nickel and cobalt can also react with dye molecules to form metal complexes, increasing the stability of the dye. Therefore, the hydrolysis salt blocking method is most suitable for the sealing of a colored oxide film, particularly a dye colored film.

Uniclic is a revolutionary system for installing laminate floors without using glue. The panels can be clicked together simply, thanks to the ingenious shape of the tongue and groove.
The Patented UNICLIC click locking system has proven itself as arguably the easiest and most trusted way to put together flooring without nails or glue. Uniclic works across multiple categories. Excellent water resistance. Proven and Trusted.